In 1983, Rick was a passenger on a motorcycle that was struck by a car from the rear side. After the accident, he was released from the hospital with an undetected subdural hematoma—a type of bleeding in which a collection of blood, usually associated with a traumatic brain injury, gathers between different areas in the brain. After discovering the hematoma, Rick underwent emergency brain surgery to have it removed.

For years, Rick lived with minimal side effects other than short-term memory loss. But in 2008, he began having seizures and the road became much more complicated. Epilepsy can originate from almost anything that causes brain damage and repetitive seizures are one of the main symptoms.

Rick was seen by several neurologists and tried many medications with different side-effects, but they still did not control the seizures. Between 60 and 70% of the population with epilepsy can control them with medication alone, but for people with intractable epilepsy, other options are required.

After Rick had a few more seizures, his team in Fargo, N.D., referred him to the St. Louis Park Clinic Epilepsy Care Program where he met University of Minnesota Physicians Neurologist Zhiyi Sha, MD, PhD.

Rick underwent a full psychological exam, a short electroencephalogram (EEG), which led to an extended EEG in the hospital, a WADA test and MRI and CAT scans.

After he completed all of the testing, and largely due to the complexity of his condition, the options narrowed. In the Spring of 2019, Dr. Sha shared what he had learned. Rick’s brain was shrinking in the location of the traumatic brain injury, and as a result, was filling with fluid. Rick’s seizures were accelerating the deterioration in the brain, making the reduction of seizures a crucial goal for any future treatment.

Dr. Sha presented several options, including surgery to remove part of the brain or insert Deep Brain Stimulation (DBS) devices that might benefit Rick given his symptoms and information. Rick and his wife, Dawn, were completely unfamiliar with DBS for seizures prior to working with Dr. Sha.

“The success rate is fairly good for the correctly selected patients, but the presurgical evaluation is very important for this,” Dr. Sha said.

DBS was originally developed for Parkinson’s disease but has recently been approved by the Food and Drug Administration for the treatment of seizures. For epilepsy patients, the DBS device is typically placed in the anterior nucleus of the thalamus. Prior research data has shown that this specific target is better than others. Yet, researchers are still working to determine specific targets for different conditions.

Rick continued to have more breakthrough seizures, and his dosage of medication was increased to try and control them, but he and Dawn both knew that they needed to consider other alternatives. Because of how complex neurosurgery is, they met with representatives from Medtronics as well as M Physicians Surgeon Michael Park, MD, PhD, before ultimately deciding to have the DBS device placed. 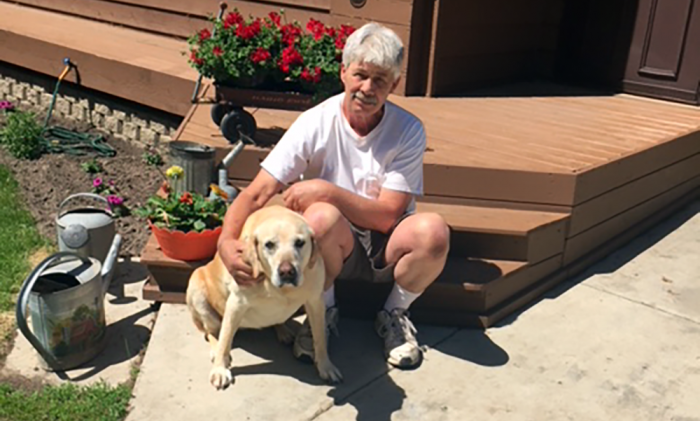 In June of 2019, Rick had his first eight-hour surgery for the placement of the two rods in his brain and a second surgery to insert the battery pack in his chest just two weeks later. Dr. Park noted that it is a difficult procedure since they need to be confident that the placement of the rods is precisely where they want them.

Once inserted, electrodes placed on the target area deliver a small electrical signal intermittently. The device’s voltage must be continually tweaked based on how a patient’s brain is reacting. External machines that link to the implanted DBS devices can then adjust the parameters and settings for patients. DBS is not a closed-loop system, meaning no data is given back to the clinician from the inserted electrodes.

“Rick knows that this is a process like medication management. Because of the brain shrinkage, Rick has decreased cognition, memory, balance and coordination issues. He does try hard to be optimistic. Besides some of the deficits from the brain shrinkage, the biggest challenge for Rick during the entire process has been not being able to drive and not being able to weld, due to the DBS device in his brain. These are things that Rick has learned to live without, but he has lost a lot of his independence. Rick is relearning each day what his strengths and limitations are,” Dawn said.

DBS is still in its infancy for seizure control, but physicians see it as a viable option for patients who can’t find effective medications. “Based on what we’ve done for the past year or two, we have pretty good results. We can’t say it’s a cure, but it’s a palliative method. Over time, research shows that the effects of DBS improves gradually,” Dr. Sha said.

Regardless of who you are or what your condition is, deciding whether or not to have neurosurgery is a huge, impactful decision.

“When I asked Rick if he would do the surgery all over again, he said, ‘Yes.’ Rick stated that he is very pleased with the team and how he has been treated at the U of M, including surgery and Medtronics. All team members care about Rick as a human being. Another barrier is that we live in Grand Rapids, which is about a four-hour drive. Dr. Sha has been great about checking in over the phone to alleviate the drive to the clinic."

To learn more about DBS and the epilepsy services available in St. Louis Park, visit the clinic’s page or call 952-525-4500.