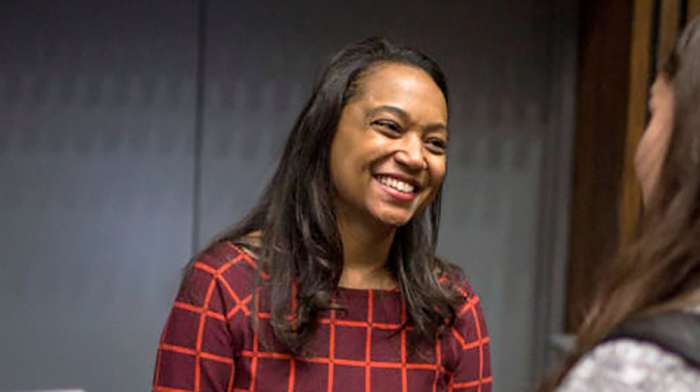 Brooke Cunningham, MD, PhD, M Physicians internist and assistant professor in the Department of Family Medicine and Community Health at the University of Minnesota Medical School, is using her platform within medicine to try and improve racial and health equity.

Ironically, when Dr. Cunningham first considered potential career paths, she wasn’t very interested in medicine. She had reservations about the field and didn't see how a career in medicine would align with her interests in advancing social justice and reducing racial disparities.

“I was not the kid that said they were going to be a doctor. For a long time, since I started developing an understanding of racial inequality–which started when I was in elementary school–I have wanted to address it. That comes from my lived experience, my family's experience and growing up in Virginia, where the first enslaved Africans came to the country,” Dr. Cunningham said.

Over time, Dr. Cunningham recognized the power that physicians could have as policymakers, community members and agents for change, but she still wasn’t sure of how to incorporate that into her own work. That all became much clearer after she participated in a summer research program at New York University where she was able to study the mentoring of black physicians. The experience served as a catalyst for her next move, which was finding an MD/PhD joint program with the PhD being concentrated in social science. Nationally, few programs offered this particular track, but she found one at the University of Pennsylvania.

“My initial interest was in understanding why this was going on and trying to make sense of racial inequality. As you get older and think about what you’re going to do with your life, it becomes ‘well how are we going to change it?’ I didn’t initially want to be a doctor because I did not see physicians as particularly active on that front, and they could’ve been, but from where I was sitting I didn’t see that,” Dr. Cunningham said.

Now, Dr. Cunningham is confronting health equity as a clinician who frequently works with underserved communities, as a researcher addressing provider and organizational barriers, and as the Diversity, Equity and Inclusion Thread Co-Director for undergraduate medical education at the U of M Medical School. She advocates for positive change in clinical care and medical education while imploring people to think about racism as a health risk factor and how structural racism affects healthcare delivery.

Dr. Cunningham believes that all physicians should be knowledgeable about the mechanisms in which racism affects health. She also hypothesizes that talking about racism, particularly in interracial relations, might help help establish an empathetic relationship between provider and patient.

As a clinician, I feel I’m most impactful, not because of my ‘book knowledge,’–though of course you need that too–but because of the relationships I have with patients. It’s about connecting with patients in a way where I’m my full authentic self and I make room for them to be their full authentic selves too. Connection is one of the most powerful tools in our arsenal. “I think if we can make those connections between doctor and patient then patient care will be astronomically better for people of color. We [Black people] can’t show up as our full selves if we are expected to stay silent about experiencing racism in America.

Dr. Cunningham’s hope is that future physicians will consider racial equity more prominently as they learn and develop their clinical skills during medical school.

“Medical education is the entry point. People who serve on admissions committees and participate in medical education are strong levers for the future of medicine. What we do here, now, really is going to have a decades-long impact, so we need to prepare our physicians for the future of medicine and healthcare that we want. The decisions made at institutions around admissions and curriculum are hugely impactful and I don’t know if people really appreciate that,” Dr. Cunningham said. The COVID-19 pandemic and increased awareness of structural racism has caused some medical schools to re-assess admissions processes, such as by eliminating the MCAT as a requirement.

Medical education is a start, but it also takes a concerted effort by stakeholders who are already in medicine to educate others and develop better communication skills. Dr. Cunningham is doing her part, but she’s adamant that change must come from providers of different racial backgrounds and in different settings.

“We can’t wait on the pipeline all of the time. In the meantime, we need to prepare current physicians and trainees to provide the best care to people from all backgrounds. Most physicians want to do that. The intent and desire to promote health equity is there, but I also think there’s a lot of fear and anxiety when people start to reimagine medicine. People also can get uncomfortable talking about racism, but I think they have to embrace that discomfort as part of the process,” Dr. Cunningham said.

Health equity is a multifaceted issue that requires physicians to navigate complex problems. As demonstrated by her past experiences and current work, Dr. Cunningham is attempting to do just that through her roles as a clinician, researcher and advocate for racial justice.