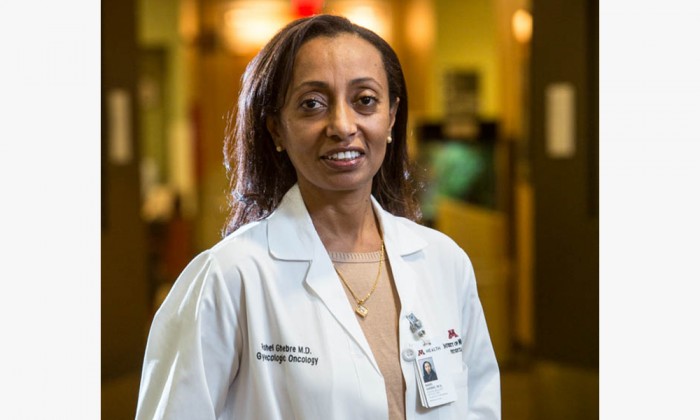 “Ovarian cancer occurs most frequently in post-menopausal women. And though it can be difficult to diagnose, there are symptoms to look out for,” Dr. Ghebre says.

Some common symptoms that present themselves early on include bloating, generalized pelvic pain and abdominal discomfort, particularly after eating.

“Unfortunately, because these symptoms are relatively nonspecific, women tend to ignore them longer than they should,” Dr. Ghebre says. “That makes it incredibly difficult not only on the patient, but also the doctor.”

For that reason, it’s incredibly important that women –– particularly those who are genetically disposed to develop ovarian cancer –– make note of any symptoms they may be having and share them with their primary care providers.

“One of the most important aspects of Ovarian Cancer Awareness Month is making sure primary care physicians are informed,” Dr. Ghebre says. “ Because typically, the disease is detected –– or at the very least, suspected –– at the primary care level.”

While there are some preventive measures that can be taken, there isn’t currently any screening test.

But where there’s been the most progress, as of late, is in the category of genetics –– tracking the genes of families who have had cases of breast and ovarian cancer.

As far as treatment options go, ovarian cancer is usually managed using a combination of both surgery and chemotherapy.

“Here at the University of Minnesota, we have not only a multidisciplinary team working to treat patients at the highest level of quality care, but we also have ongoing clinical trials,” Dr. Ghebre says.

“This is the only way we can make advancements,” Dr. Ghebre says.

In short, awareness is key.

“I would say that for patients, sometimes just taking a moment to recognize those kinds of more subtle symptoms of ovarian cancer could be very helpful,” Dr. Ghebre says. “So, just thinking about it for a fraction of a second and being aware is crucial.”

If you, your family or friend have any of these symptoms, they are not always just changes of your body with time. They really can be a sign of a serious medical issue.

“It’s not unheard of for the patient to be the one that initiates and pushes along her doctor to evaluate it further,” Dr. Ghebre says. “It’s ok to tell your doctor that this is not normal for you, and ask them to look into it further.”