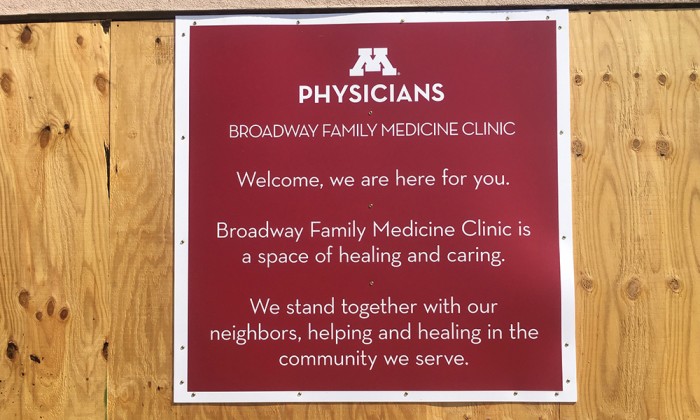 The University of Minnesota Physicians (M Physicians) Broadway Family Medicine Clinic reopened on Monday, June 8, after being vandalized during the civil unrest that erupted in Minneapolis as a result of the murder of George Floyd.

Late in the evening on Thursday, May 28, Broadway Clinic manager Oren Avery received word that the clinic had been broken into.

“I tuned in and was actually able to watch the footage live through our security cameras,” Avery said. “Initially, it was hard to see what was happening, however, after a few minutes I could see that people were starting to trickle in from less visible areas of the clinic.”

When Andrea Westby, MD, a family medicine physician at the clinic showed up to work the following Saturday, she was shocked to see the state of the clinic.

“It was difficult to see the clinic damaged, knowing that it means so much to our community,” Dr. Westby said. “However, we understand and respect the revolutionary rage that led to this and are in full support of our community.”

Though many of the clinic staff were saddened after an initial survey of the clinic, they realized that now, more than ever, the community needed support.

Kathryn Justesen, MD, a family medicine physician at the clinic, is confident that the Broadway Clinic will recover.

“At this point, we really just want to help heal our community," Dr. Justesen said. “It was only material items that were damaged, and those can be replaced.”

So, on Saturday, May 30, the clinic’s providers, residents, clinic staff and medical students participated in a supply drive for the neighborhood in the clinic's parking lot––an idea spearheaded by local community organizers in response to needs raised by members of the community after losing their neighborhood grocery stores and pharmacies. The organizers hope to continue the resource drive until local stores reopen, and the University of Minnesota Medical School students, as well as graduates of the North Memorial Family Medicine residency program, are currently leading the volunteer efforts on behalf of the Broadway Clinic.

“Our goal is to continue serving our community as best we can,” Avery says. “Although the vandalism affected us tremendously, we are fortunate to continue to provide virtual video, telephone and face-to-face office care on the east side of the clinic.”

Though they were closed for a little more than a week, they were able to convert the majority of their scheduled patient visits to virtual appointments. Face-to-face office visits resumed in the clinic on June 8.

As previously announced, the clinic will also be relocating in early 2021 to the northeast corner of Broadway and 26th Avenues in the Jordan neighborhood of North Minneapolis––to continue serving the community that has been, and will continue to be, so dear to the clinic and all of its providers and staff.