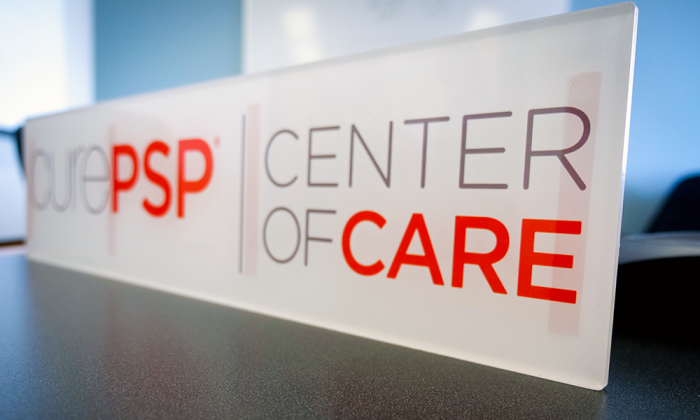 Progressive supranuclear palsy (PSP) is a rare degenerative brain disorder that can be devastating and debilitating. Judy Kroenenberg received her diagnosis in April 2017.

Corwin, her husband, recalled, “It blew us away because we’d never heard of it. We thought she had Parkinson’s but was diagnosed with PSP. It affects movement, thinking, balance, swallowing, speaking and coordination. The worst part is that it progresses. It requires constant support and care.”

PSP is similar to Parkinson’s disease, but affected individuals typically have worse balance, often manifested by unexplained backwards falls. Over time, individuals can become withdrawn and apathetic, along with problems moving their eyes that impact their ability to read or look at a screen. Speech and swallowing issues as well as progressive movement problems ultimately lead the individual to a stationary sitting role.

The disease requires a holistic approach, which is led by Paul Tuite, MD, M Physicians neurologist, and a nursing staff, including Susan Vold, BSN, RN, PHN, BA, HNB-BC, and Kailey Stenger, BSN, RN, HNB-BC. Recently, the team received a CurePSP Center of Care designation, which recognizes the best places to go for treatment when someone has PSP.

The couple’s experience is a testament to this designation.

“Working with Dr. Tuite and his team, they make you feel like you’re the most important people in the world. It radiates in them and their care. They do everything in their power to make quality of life better as the disease progresses."

Susan Vold explained her approach when caring for patients with PSP.

“Holistic nursing is nursing care that is not only focused on the medical management of a patient but on the whole person, including their families. It looks at the effects of illness on body, mind, spirit and social relationships. While a cure is not available for PSP at the moment, healing and support is always possible.”

The clinic is considered a center of excellence for several reasons, as best explained by the medical professionals who work there.

“The relationships between the team members are key in providing patient-centered care, which constantly needs to be monitored to ensure we are providing the highest level of care along with access to cutting-edge research. Because of the team’s deep respect and admiration for one another, all voices are heard and valued. In this way, the patient benefits by being able to access the gifts each team member brings to the table."

Dr. Tuite added, “One way we are unique is our dedication to improving communication access to patients and families over the phone as well as electronically. We offer telepharmacy consultations and try to ensure everyone has an electronic medical record portal. This provides a means for us to listen and try to address concerns that are raised.”

Assembling an interdisciplinary team was crucial as it allows the caregivers to personalize their treatment approach. This includes providing education for care partners of those with PSP, giving them the resources they need to keep quality of life high when at home.

Corwin expressed immense gratitude when speaking about his experiences with Dr. Tuite and his care team. “You feel the concern he has for the caregiver as well as the patient. It’s a really comforting experience to work with him. We know that Dr. Tuite will make it happen, so you feel you’re never alone and that comforting feeling of knowing you have support is great,” Corwin said.

Not only does the team provide world-class medical care for the disease, but they are also well versed in managing the effects that the illness can have on loved ones. Providing compassionate care through therapeutic communication is a foundational reason for the CurePSP Center of Care designation. The team is poised to address cognitive and movement problems for years to come.