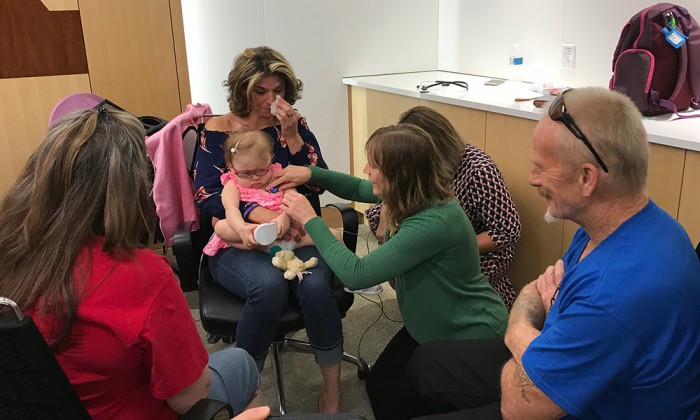 Cazmirr “Cash” Landers was a happy and energetic two-year-old who loved trains and spending time with his family, but in September 2018, Cash drowned in a pool, and after fighting for 6 days, he passed away. Cash’s mother, Brooke Eaton, made the selfless choice to participate in organ donation so her loss could mean saving the lives of four people. One of those is Lola Bond.

When Lola Bond’s grandmother, Margaret Bond, was told their newborn baby granddaughter had a condition called cardiomyopathy, a disease that results in an enlarged heart, she was devastated. Lola’s heart was crushing her surrounding organs and could not work effectively in Lola’s infant body. The Bonds were running out of time and hope until a call came from the University of Minnesota Masonic Children's Hospital (UMMCH) saying that a match for five-month-old Lola had been found.

Cash’s family takes comfort in knowing that his life has made an impact on other families in a way they never imagined. Brooke stated, “Cash, he was very smart, independent, outgoing, always into stuff, always wanting to do something. He never sat for more than five seconds. He loved to give to people. He loved to play with other children, he loved to share. So, his life—giving some of it to Lola and other children—is just part of who he was, who he is. He’s still with us, even though he’s gone.”

Today, at UMMCH, Cash’s family and Lola’s family met for the first time. The special donor-recipient meeting was coordinated through Gifts of Hope, an organ and tissue donor network. Only a small percentage of donor families and recipients actually meet in person, making the moment even more special.

It was a tense moment, but both sides were eager to share the experience. Margaret Bond, Lola’s mother detailed, “Lots of nerves, probably some excitement. More nervous as the day came. That nervous excitement. It was like Christmas morning, as a kid. Just know that we could hopefully bring some relief to her [Brooke] by hearing that heartbeat. He’s living on.”

Brooke described the moment herself: “I walked into the room and immediately broke down and cried. It was very intense. As soon as I saw her, I fell in love with her. She’s just precious.”

Brooke’s decision and the impact it’s had on the Bond family will last for a lifetime.

There’s no doubt... We wouldn’t have Lola if it wasn’t for the miracle that we received in this heart. Knowing that there is a whole other family out there that loves her as much as we do is amazing. So, we have the rest of her life to celebrate every day. Cash’s story can continue with Lola’s journey. Together, it’ll be two really great things.

It was an incredibly emotional day for everyone involved, but also a reminder of the beauty that can come from tragedy. Cash’s memory will live on forever through Lola. Margaret stated it well, “On both sides, as hard as it is, this is the greatest miracle we can be given.”