YOUR NOSE: YOU DON’T HAVE TO LIVE WITH IT

Let’s face it. Nose development is usually hereditary and, whether you like it or not, the nose your father or mother has is likely to be your own. As you mature, a handed-down overdeveloped nose, enlarged bridge and wide tip may very well come to create your profile. By now you know what the shape of your nose is, and genetics and your perception of beauty may have left you unhappy with the nose you were born with.

Of course, sometimes facial distortions can be no fault of your own even after birth. Maybe, you were involved in an accident that left your nose out of joint. No matter. Rhinoplasty is another term for a “nose job”, and the good news is that it’s a cosmetic procedure that can bring your nose back into harmony with the other favorable features of your face.

Perhaps, you’ve heard about Amanda Bynes. The former What I Like about You actress took to twitter last week to announce she had another nose job. 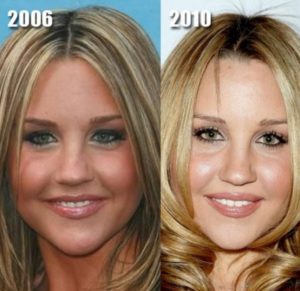 “My dad is as ugly as RuPaul! So thankful I look nothing like you both! I had nose surgery after my mug shots so my nose and I are gorgeous,” wrote the 27-year-old actress and drama-plagued child celebrity who said she wanted to get another plastic surgery procedure after her arrest last month.

Bynes had gone public earlier last month after rhinoplasty when she said she disliked her old photos that kept appearing in media outlets.

“I don’t look like that anymore,” she said. “I had a nose job to remove skin that was like a webbing in between my eyes. I wasn’t going to tell anyone, but I look so much prettier in my new photos that I don’t want old photos used anymore.”

The reality is – thanks to rhinoplasty – that Bynes is happy about a perception of herself that was troubling her. Reshaping of the nose has also been known to improve self-confidence and may correct impaired breathing caused by structural abnormalities in the nasal passages.

That said, there is no need to take out a perceived imperfection on your father or mother. Rhinoplasty can reverse a family trait, leaving you responsible for the way you look, but your family is still your family.

If you are tired of your nose and how it looks, rhinoplasty might be able to help. Contact the Hilger Face Center of Edina, MN for a pressure-free consultation on the protocols, risks and realistic outcomes of rhinoplasty.

Dr. Peter Hilger has been performing facial cosmetic surgery in Edina, Minnesota for over 30 years. With thousands of cosmetic procedures performed, his breadth of knowledge and talent is unmatched. Learn more about our Peter Hilger.